About the Boxwood Bicycle Polo Company

The Boxwood Bicycle Polo Company was founded in 1994 by Lou Lopez and Bill Matheson, two members of the legendary Boxwood Bicycle Polo Team, which went undefeated in 4-on-4 competition from 1972 through 1981, at which point they went their separate ways. That's Matheson and Lopez at the far right in the picture above, after Boxwood's victory in the 1972 Cartier Challenge Cup in Southhampton, NY. Their other teammates were Charlie Bostwick (#5), Peter Mulligan (#4), and the late Jan Wendland (#2). The Cartier Challenge Cup was played from 1971-74, at which point the beautiful silver and gold trophy with the wooden base disappeared. There have been several sightings reported at the Racquet Club in New York City, but repeated efforts to recover the trophy have come to naught. 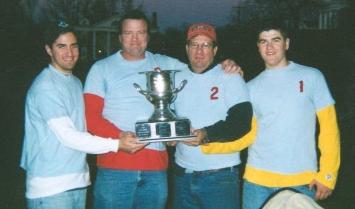 In a 30th reunion of sorts, Bill Matheson and Lou Lopez teamed with Lopez's two sons, LJ (left) and Mat (right) to win the tournament named for their late teammate, Jan E. Wendland. The tournament was played at University of Virginia's Madison Bowl; Lopez is currently the manager of the University of Virginia Polo Center and coach of their intercollegiate polo teams.


Since 1994, the Boxwood Bicycle Polo Company has been dedicated to providing quality bike polo equipment at very reasonable prices, in order to promote the growth of the sport. We have also sponsored teams in international competition and tournaments here in the U.S. In the next couple of years we hope to increase our involvement in tournament sponsorship throughout North America, visiting the various groups that participate in our wonderful sport.